AMUNET AND NESKHONSPAKHERED: AMBASSADORS FROM THE UNDISCOVERED COUNTRY

AMUNET AND NESKHONSPAKHERED: AMBASSADORS FROM THE UNDISCOVERED COUNTRY 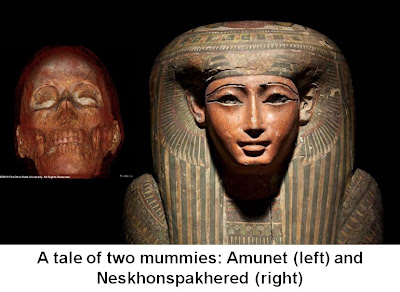 The Ohio Historical Society has an Egyptian mummy. You may already be aware of that fact, because it’s one of our most popular exhibits. People who visit the museum invariably remember seeing the mummy even decades later.

I find it somewhat embarrassing to admit, but I’ve never paid too much attention to it before. My lack of interest could be considered surprising, because you would expect a mummy, the ultimate icon of hoary antiquity, to be high on any archaeologist’s list of favorite things.

I suppose my lack of interest has been due, first and foremost, to the fact that I am not an Egyptologist, so I have had no research interest in the mummy. In addition, Egyptian mummies would appear to have little to do with the mission of the Ohio Historical Society. As a result, the institution hasn’t quite known what to do with it. Currently, it’s displayed alongside of a two-headed calf as curious examples of the sorts of things museums displayed back when they were little more than super-sized cabinets of curiosity. 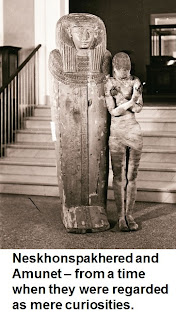 The results of new research, however, have changed all of that for me. In partnership with the Ohio State University’s Wexner Medical Center, we have obtained amazing, state-of-the-art CT scans of the mummy, which make it inescapably clear that we don’t have “a mummy”; we have the mummified remains of a woman a woman who had a life 2,000 or so years ago.Thanks to the work of Dr. Joseph Yu and the OSU Wexner Medical Center team, described in an article, a video and a slide show of images in todays Columbus Dispatch, we are learning intimate details of that life. She is now a woman with a story. She can never again be an object for me.

At the same time, historical research by the Egyptologist Cynthia May Sheikholeslami, also discussed in todays Dispatch, has made it clear that we don’t have just one story we have two. The coffin belonged to a woman named Neskhonspakhered. Hieroglyphics on the coffin tell us not only her name, but also that she was the “daughter of the Doorkeeper of Amun Bakakhonsu and the House Mistress Heres.” Apparently, when J. Morton Howell, Americas first Ambassador to Egypt, acquired Neskhonspakhered’s splendid coffin, her mummy already had been removed from it. Howell planned to donate the coffin to a museum in his home state of Ohio and felt it needed a mummy to be complete. He asked French archaeologists working at the site of Deir el-Medina near Thebes if they had one they could spare. They did. It was delivered, placed in Neskhonspakhered’s coffin and presented to the Ohio Historical Society as a set.

Once we realized that the woman in our coffin was not Neskhonspakhered, my colleagues and I decided to give her a name. It was important to us that she be more than “that mummy” an object. We wanted to give her some dignity. We chose the name Amunet for her. It’s an Egyptian name that means the “hidden one.” We thought it was appropriate, because although we have been able to learn much of her story and we may learn more, Amunet’s true identity will be forever hidden.

So we now have two stories Amunet’s and Neskhonspakhered’s. And we have a better idea of how their stories are linked to the story of Ohio and the Ohio Historical Society’s mission.

Amunet and Neskhonspakhered’s coffin were gifts to the Society from the United States first ambassador to Egypt. Howell, an Ohio native, could not have known the true value of these gifts.

Shakespeares Hamlet refers to death as the undiscovered country from whose bourn no traveler returns. Neither Amunet nor Neskhonspakhered, wherever she is, can return to life and share their stories with us directly, but the scientific study of the physical remains of Amunet can allow us to listen to what the Choctaw archaeologist Dorothy Lippert has so aptly referred to as her voice made of bone. Amunet and Neskhonspakhered are not curiosities with no relevance to Ohio. Rather they are ambassadors to Ohio from the undiscovered country revealing facets of their ancient lives through the lens of scientific inquiry.

Hamlet’s last request of Horatio was for him to “tell my story.” The challenge of archaeology lies in finding new ways to retrieve lost stories. Medical CT scanning isn’t all that new, but it has provided a new look at Amunet and it has gifted me, as a museum curator, with details of her story that we’re now sharing with the world.

When next you come to see Amunet and Neskhonsupakhered I hope you see them with new eyes and treat them with the respect due to ambassadors ambassadors from the distant past.

“The past is a foreign country: they do things differently there.” – L. P. Hartley 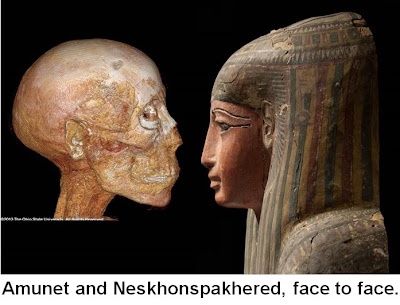